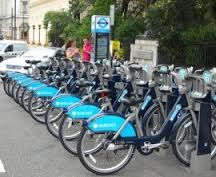 The nation’s biggest bicycle-sharing program got rolling Monday, as thousands of New Yorkers got their first chance to ride a network billed as a new form of public transit in a city known for it.The privately financed program called Citi Bike, after lead sponsor Citigroup Inc.  kicked off with 6,000 bikes at more than 300 stations. Plans call for expanding it to 10,000 bikes docked at 600 places in Manhattan, Brooklyn and Queens. Riders now can unlock the three-gear, cruising-style bikes from any station, take them for 45-minute rides and return them to any rack.

The city commissioner said it is one of more than 500 bike-sharing systems around the world, New York’s is the biggest in the United States. Fifteen thousand people already have signed up for New York’s program.This City Bike program enables New York city with an  accessible transportation option and contributes to the measures of livable communities.